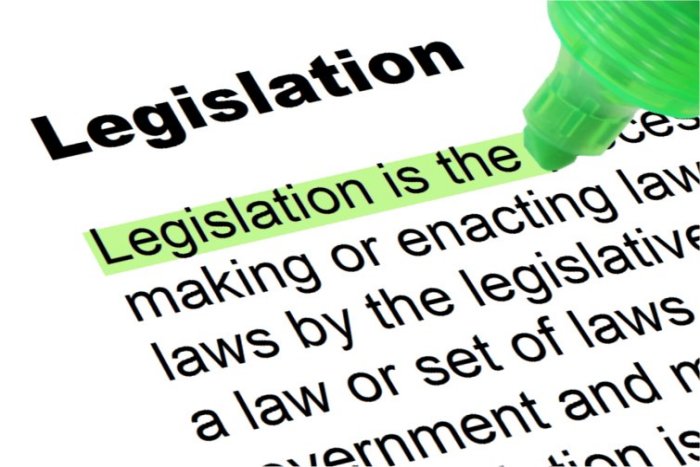 There are different forms of legislation and the two main categories are:

An Act of Parliament creates a new law or introduces changes to an existing law.

Public General Acts are the most common as these result from Public Bills which have received the Royal Assent.  There are also Local and Personal Acts which follow from Private Bills and Church Measures.   Find out more about Bills and how to trace them via the Parliamentary Papers guidance.

Church of England Measures are the instruments by which changes are made to legislation relating to the administration and organisation of the Church. The General Synod of the Church of England has the power to propose legislation to Parliament's Ecclesiastical Committee. This committee is made up of Members of both Houses. The committee examines the Measure and then makes a report as to whether it thinks the Measure should be made. A draft of the report is sent to the legislative committee of the Synod. If Synod agrees, the report and the Measure can then be laid before Parliament. Motions need to be passed by both Houses before the Measure can be presented for Royal Assent.

Each Act is given a chapter number within a year.  This is not the same number as when it was in Bill form so if you are tracing legislation from its initial bill stage through to enacted legislation you will have a number of different official publication document references to note for your research

Acts are referred to by their short title, year, chapter notation abbreviation and the chapter number.

For example the Human Rights Act 1998 is referenced as follows, meaning that this was the 42nd Act passed in the year 1998

The European Union Referendum Act is referenced as follows, being the 32nd Act passed in 2015

Since 1963 chapter numbering has been within the calendar year, but before 1963 it was by parliamentary session, indicated by regnal year or years. For example:

JustCite provide a handy regnal year listing that you can use to identify the calendar year if you only have a regnal year citation.

An Act may come into force immediately, on a specific starting date, or in stages. The enactment provisions are detailed in the Act.

For example, here are the enactment provisions for the Human Rights Act 1998 c.42

The practical implementation of an Act lies with the appropriate government department rather than Parliament.  However, Parliament can investigate how the Government implements an Act and it considers any future changes that are introduced to amend an Act.

Future changes are introduced through the passing of another Act or through delegated legislation.  Acts or specific provisions of Acts can also be repealed so that they are no longer law.

Secondary legislation allows the Government to make changes to a law without needing to push through a completely new Act of Parliament. The original Act (also known as primary legislation) would have provisions that allow for future delegated legislation to alter the law to differing degrees.

Statutory instruments form the majority of delegated legislation but it can also include Rules or Codes of Practice.

A House of Commons Background Paper provides more detailed information on Statutory Instruments and other forms of secondary legislation.

In this example the Statutory Instrument is made under powers conferred from the primary legislation in the Football Spectators Act 1989. 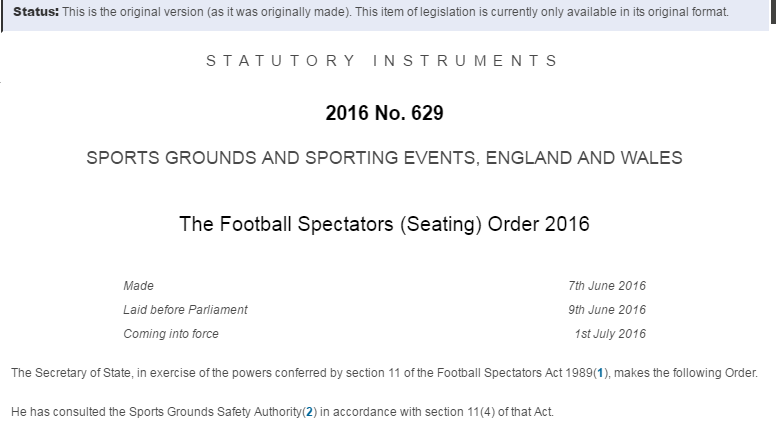 The changes that may be introduced range from the technical, like altering the level of a fine, to fleshing out Acts with greater detail; often an Act contains only a broad framework of its purpose and more complex content is added through delegated legislation.

SIs are normally drafted by the legal office of the relevant government department. Consultations often take place with interested bodies and parties.

In the example above the Minister for Sport, Heritage and Tourism, Secretary of State: Department for Culture, Media and Sport made the order in consultation with the Sports Grounds Safety Authority.

Around two-thirds of SIs are not actively considered before Parliament and simply become law on a specified date in the future. Others will require approval from both Houses before they become law.

Around 3,000 SIs are issued every year and each contains an explanatory note explaining its scope and purpose. 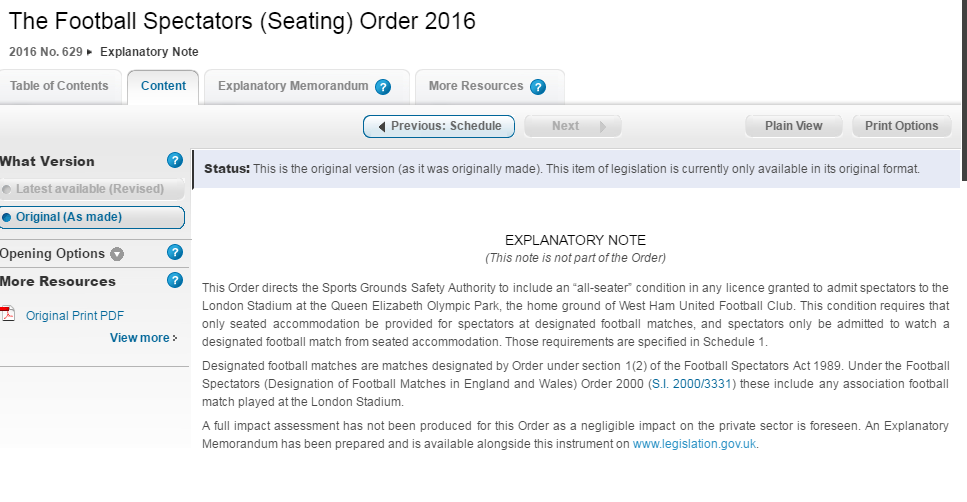 All legislation from 1988 – present day is available in its original form, plus a revised version showing amendments which have been made since the original version.  Most pre 1988 legislation is also available, however in some cases there will only be an originally published (as enacted) version and no revised version.  This guide explains more about the legislation on legislation.gov 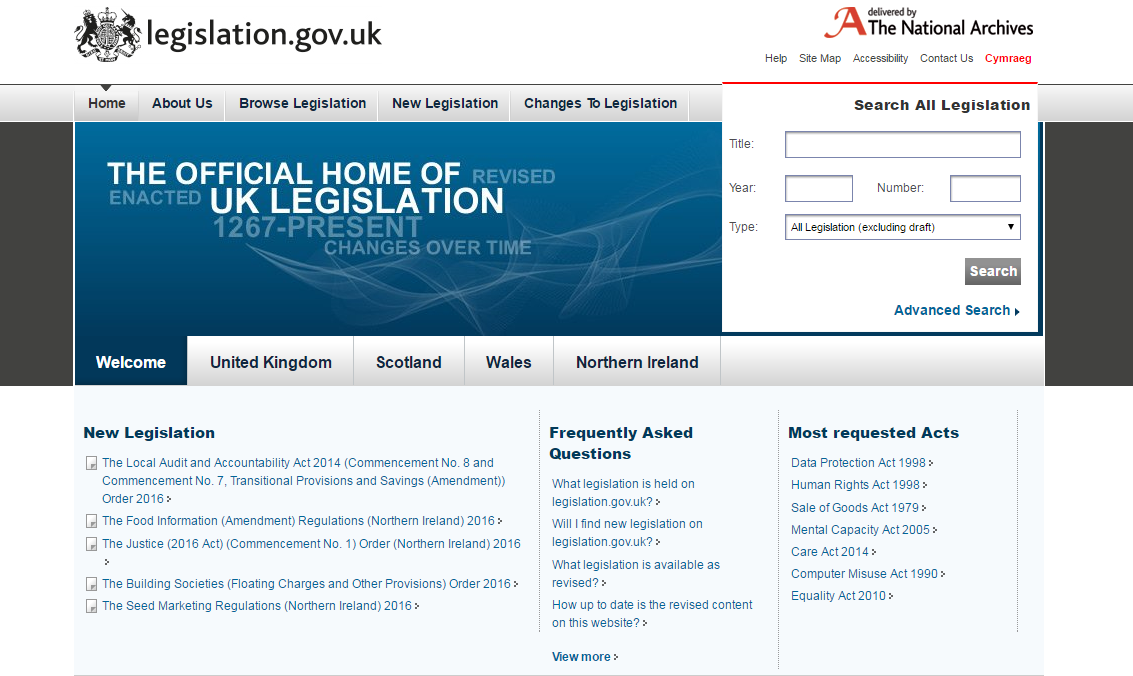 JustisOne is a a fully-searchable legal database of case law and legislation. Full text legislative coverage extends from medieval times to the present day.

All Acts appear as enacted, with links to amended and amending legislation allowing the user to trace the development of the law.

Secondary legislation covering England, Scotland and Wales from 17th century to the present day is available (1671 – present) and includes:

A complete and fully searchable database of all as-enacted, full-text local legislation from 1797 to date is available.

The Statutes of the Realm were originally published between 1810 and 1825, as an authoritative collection of the statutes from 1235 to 1713.  Hein Online presents the 11 volumes, of which volume 10 is an alphabetical index and volume 11 is a chronological index.  Chronological tables and alphabetical indexes are also available in each separate volume.  The Statutes of the Realm were compiled in pursuance of an Address of the House of Commons of Great Britain of 11 July 1800, respecting the public records.  Some of the earlier statutes are in Latin or Norman French.

If you know the year or century of the Act you need, choose the relevant volume from the contents list in Hein, and look up the Act by name or topic in the alphabetical index to the volume, or by year in the chronological index.  If you are unsure of the date, try looking up the Act by name or topic in volume 10.  Using the work's own indexes works best.  If you use the Hein search engine to search by word or phrase, be aware that Hein presents the Statutes of the Realm in very close proximity to the English Reports, and the results of your search will contains hits from the English Reports as well!

The Lexis database includes current amended versions of UK Public General and Scottish Acts and Statutory Instruments that are currently in force.

Choose the Legislation tab in Lexis and then you can browse through the menus or search to find content.

In addition to the amended text you also use a range of different database features to explore related content and quickly see which sections are in force and which have been amended/repealed.  Use the options in the Find Out More section for this added value content. 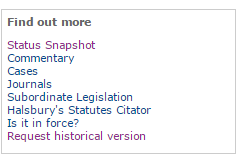 Select the Legislation option from the Westlaw menu bar to search or browse to find content. The Advanced Search screen allows you to choose whether to restrict your search to the full text of legislation as it stands today or broaden it to include other versions.

Fully consolidated full text of Acts since 1267 and Statutory Instruments since 1948 and selected Westminster Parliamentary Bills from session 2015-16 onwards are available.

You can use the added value features to link seamlessly to other pieces of legislation, cases citing that legislation and access related secondary material such as journal articles. 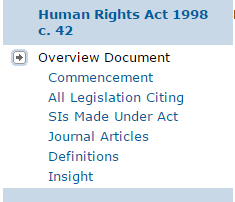 Insights are articles written by industry experts to keep you updated on the latest legal research on specialist topics.

The Lasok Law Library has a print Legislation section with copies of print Statutes (Acts of Parliament) and Statutory Instruments.

However, it is recommended that you use online sources for your legislative research.  Often you will not only be interested in consulting legislation as it was originally enacted, but will also want to examine the revised versions which incorporate any amended or repealed sections that have come into force subsequently.  It is much easier to trace these legislative changes using online legislation resources.

Use the Guide to printed Materials below to find the bay numbers for the legislation series in the Law Library.