This resource guide has been created to highlight LGBTQ+ related archives and books held at the University of Exeter Heritage Collections. We recognise that items relating to LGBTQ+ experiences, history and literature are not easily identifiable via our webpages or catalogues, so we hope this guide will provide a more accessible means of exploring this material.The collections highlighted in this guide have been identified using our catalogues, but are not exhaustive. If you come across any other sources within our collections that you think should be included in this guide, we would be very pleased to hear about them.

Detailed guidance on researching sexuality and gender identity in archives can be found on the webpages of The National Archives.

To discuss our LGBTQ+ research resources in more detail, please contact us at libspc@exeter.ac.uk. We would welcome your feedback on our approach to this resource guide, its content and the terminology used.

David Rees was born in Surbiton in 1936 and moved to Exeter to 1968 to take up the position of lecturer at St Luke's College. He became lecturer in education in 1978 when the college became a part of the University of Exeter. He remained at the University until 1984, when he retired early in order to write full-time. He lived with HIV and AIDS, which he talked and wrote about openly. He continued writing until his death in 1993.

David Rees came out as a gay man when he was 37 years old and he had his first novel accepted for publication the same year. Much of his fiction was aimed at young adults and explores the experiences of growing up as a gay teenager. His novels Quintin's Man (1976) and In the Tent (1979) were the first books for teenagers in the UK to have central gay characters. His novel The Milkman's On His Way (1982) was cited in Parliament during the Section 28 debates and was accused of promoting and 'glorifying' gay sex. 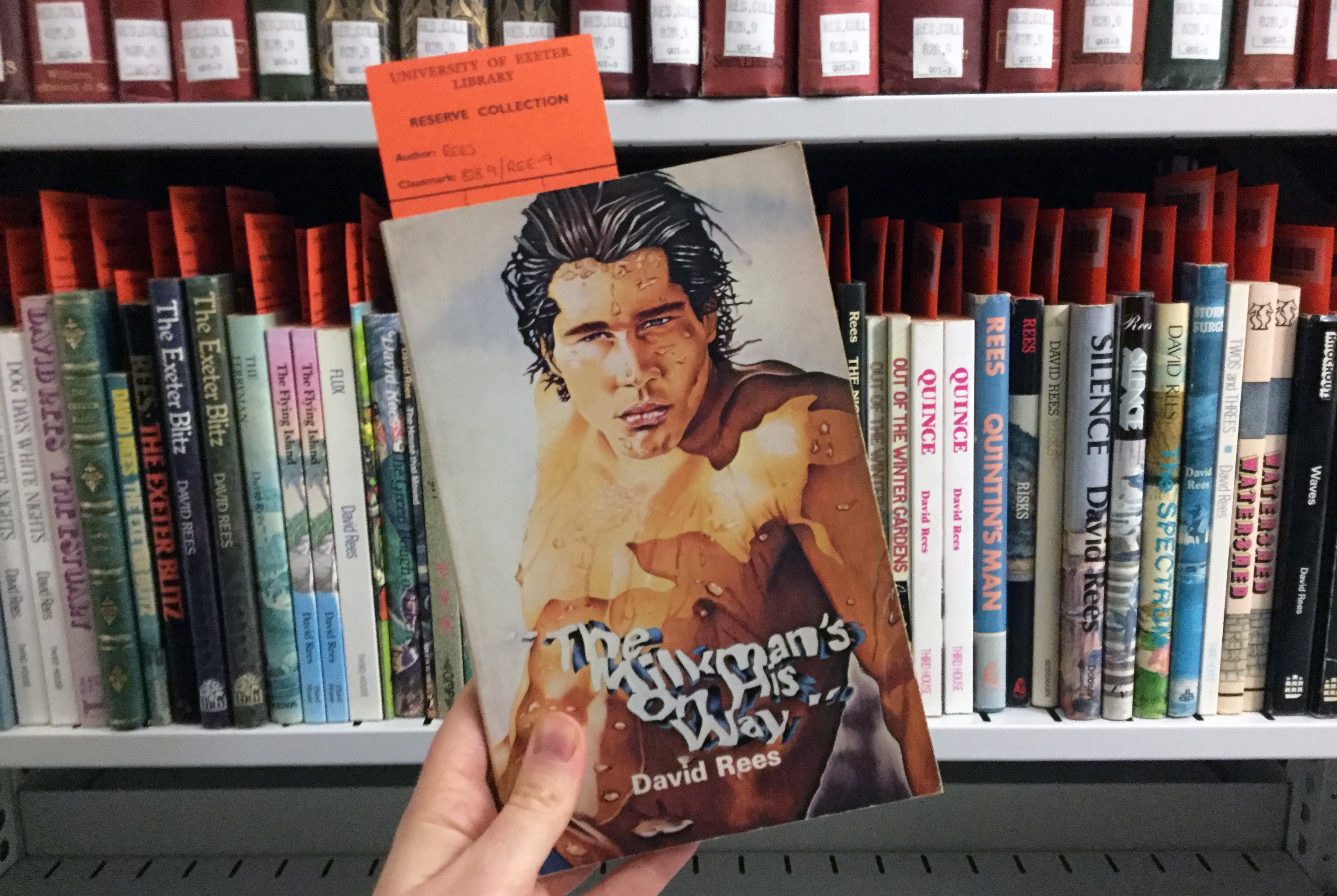 The archive collection at the University of Exeter comprises literary papers of David Rees dating between c 1975-1993. Not all of his works are included, but his most celebrated published novels, essays and stories are all represented here, including Storm Surge, The Exeter Blitz, The Milkman's On His Way, Letters to Dorothy and his autobiography Not For Your Hands. Some of the manuscripts were published posthumously. As well as manuscripts and typescripts, reviews collected by Rees following publication are also available.

The literary papers of David Rees have been catalogued and can be browsed via the online archives catalogue.

Editions of many of David Rees' books are held within our Reserve Collection, catalogued under the classmark: Reserve 828.9/REE-9. You can browse the titles in the library catalogue.

Denton Welch was born in Shanghai, China in 1915. He entered Goldsmiths School of Art in 1933. He intended to be a painter but, after suffering a serious injury following a cycling accident in 1935, he devoted most of his life to writing. Towards the end of 1939 he sold his first painting to the oil company Shell, and wrote an autobiographical novel, which was published in 1942 as 'Maiden Voyage'. He also began writing the journal which he continued almost to the end of his life. In 1943, Denton Welch met his partner, Eric Oliver, with whom he lived from 1944 until his death. He died at home in Kent on 30 December 1948.

His archive collection at the University of Exeter includes personal and literary papers, including photographs, letters, and manuscript drafts of his stories.

The literary papers and photographs of Denton Welch have been fully catalogued and can be browsed via the online archives catalogue. 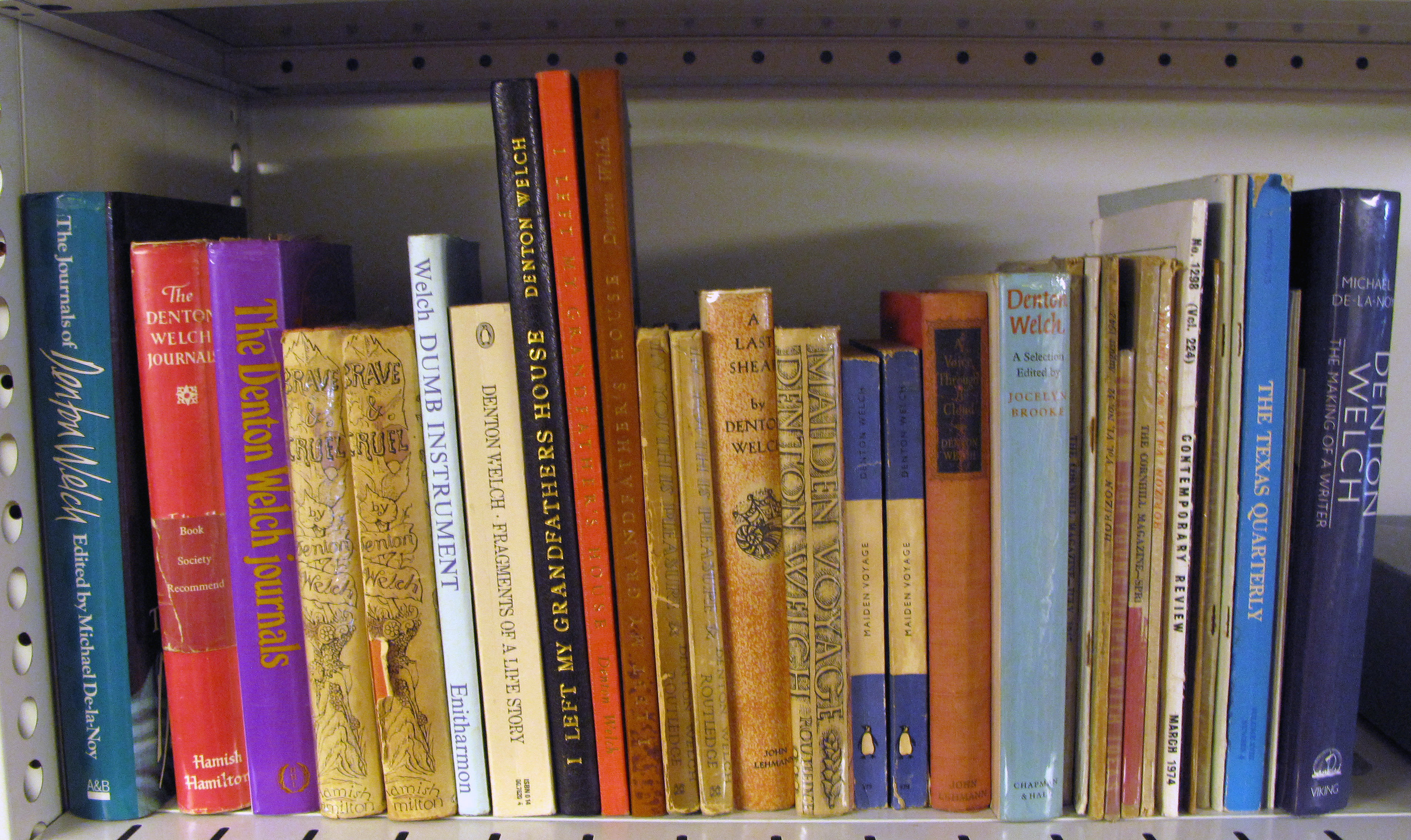 Special Collections also holds a small collection of published items by Denton Welch, including catalogues, first editions, copies of biographies and editions of the journals, poems and paperback editions. This is catalogued under the local classmark: Welch Coll. You can browse the titles in the library catalogue.

Rupert Croft-Cooke was born in Kent in 1903. As an adult, he taught English for five years, first in Paris and then in Buenos Aires, where he founded and edited the periodical 'La Estrella'. He returned to England in 1925, setting up a bookshop in Kent, as well as doing broadcasting and journalism work. Before joining the army in 1940, he moved abroad again to Germany, Switzerland and Spain. Returning to the UK in 1946, he took up writing again, holding the position of book critic for 'The Sketch' between 1947 and 1953. In 1953, Croft-Cooke was convicted of 'gross indecency' due to his same-sex relationships. He served a six-month prison sentence, and later wrote about the British penal system in The Verdict of You All (1955). Fearing further persecution in the UK, In 1953 he moved to Morocco for fifteen years until 1968, after which he lived variously in Tunisia, Cyprus, Germany and Ireland before returning to the UK. A substantial part of his work was written abroad. He published more than 125 books of all genres, many for the mass market, and was best known as a writer of detective fiction: many of these works were published under the name Leo Bruce. He was 64 when homosexuality was decriminalised in the UK. He died in 1979.

His archive collections at the University of Exeter include: seven scrapbooks; one portrait; photographs; press cuttings; a typescript for an unpublished play; a set of files and envelopes relating to works for The Sensual World, his autobiography; a small set of film stills for 'Seven Thunders'; correspondence with publishers; personal letters; fan mail to Rupert Croft-Cooke; and a small group of carbon copies of letters to other writers (copies of letters at the Harry Ransom Centre, Texas).

A full collection description for the literary papers of Rupert Croft-Cooke can be browsed on the online archives catalogue. 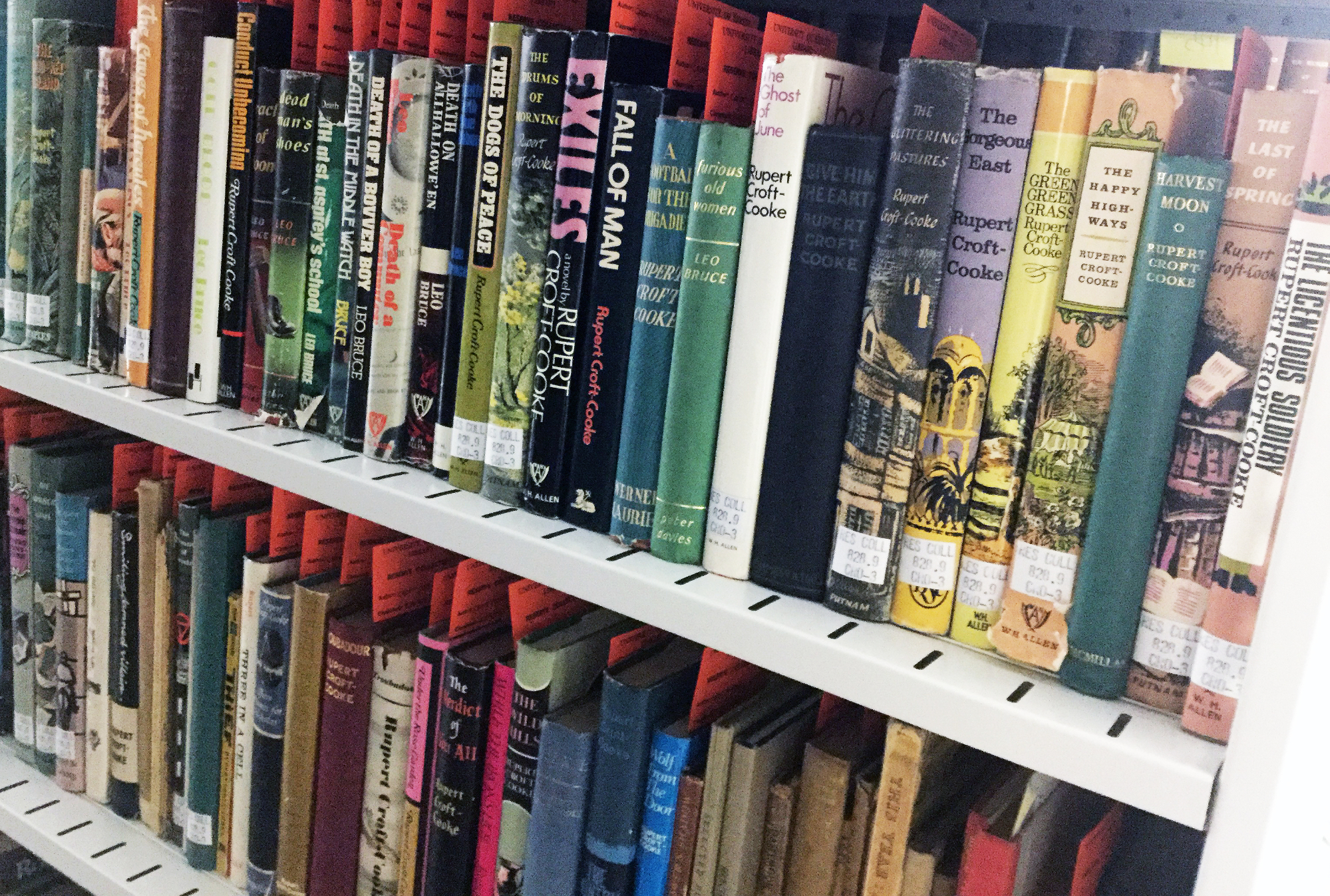 Editions of many of Rupert Croft-Cooke's books are held within our Reserve Collection, catalogued under the local classmark: Reserve 828.9/CRO-3. You can browse the titles in the library catalogue

The Bill Douglas Cinema Museum has a collection of over 80,000 objects on the history of the moving image. This is a rich resource for researching and understanding LGBT+ history, not just in terms of representation but also in showing the importance of cinema as a place of identification for LGBT+ communities. As well as books and publicity material on key films, you can also find evidence of the coded expressions of gay life before legalisation in publications such as Films and Filming. You can find more on this in a blog on our website by Dr Chris O’Rourke at http://www.bdcmuseum.org.uk/news/queer-uses-of-british-fan-magazines/. In addition we hold important archive material on the work of Derek Jarman, both in the archive of James Mackay, who produced many ground-breaking gay films from the 1970s including Jarman’s Blue, The Garden and The Angelic Conversation and the papers of Don Boyd who produced Jarman’s The Tempest  and The War Requiem. We work with a number of scholars across the University in research and teaching on the role of the moving image in LGBT+ histories.

Find out more about the Bill Douglas Cinema Museum collections

The Hypatia Collection consists of approximately 10,000 books and journals by or about women. Part of its richness stems from the inclusive collecting habits of its creator who acquired many ephemeral titles and books on subjects and by writers traditionally excluded from the academic canon in her aim 'to make available published documentation about women in every aspect of their lives'. 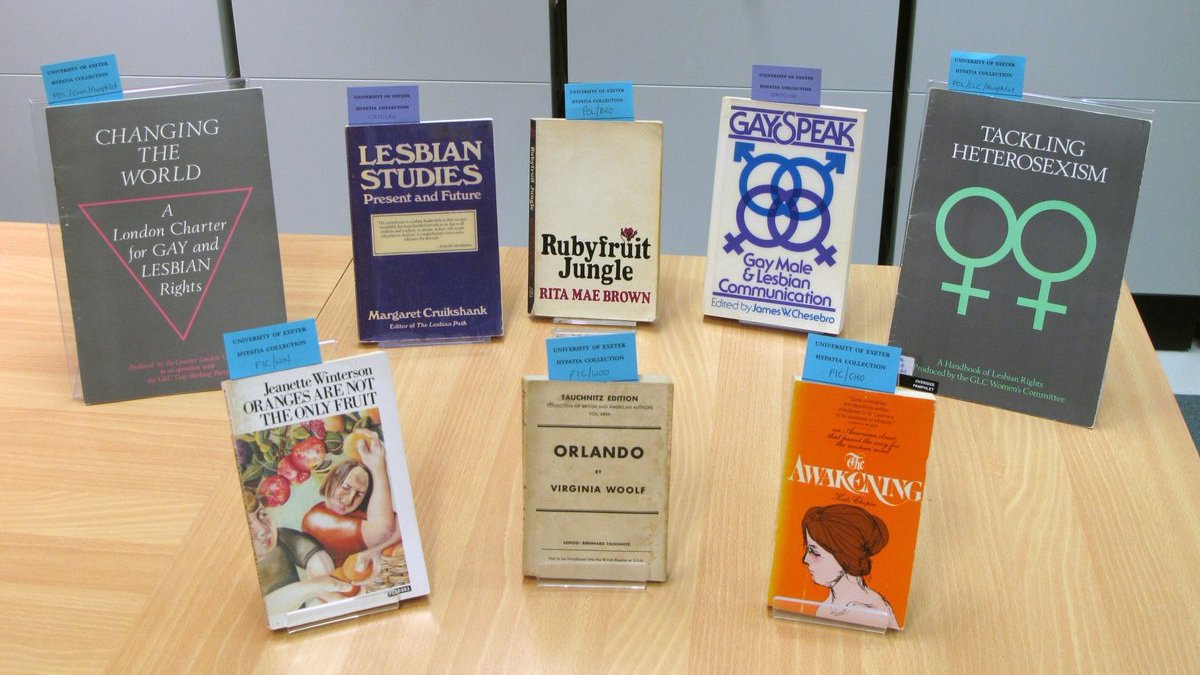 The collection includes a range of books and pamphlets relating to or exploring sexuality and gender identity. You can find examples of fiction and non-fiction works in the tabs within this box. Please note that these lists are not exhaustive, and further items of relevance may be found within the collection. If you identify any books within the collection that could be added to the list, we would be very pleased to hear about them.

Examples of fiction books by LGBTQ+ and/or exploring LGBTQ+ themes include:

Examples of non-fiction books and pamphlets include:

- and interviews with gay writers: 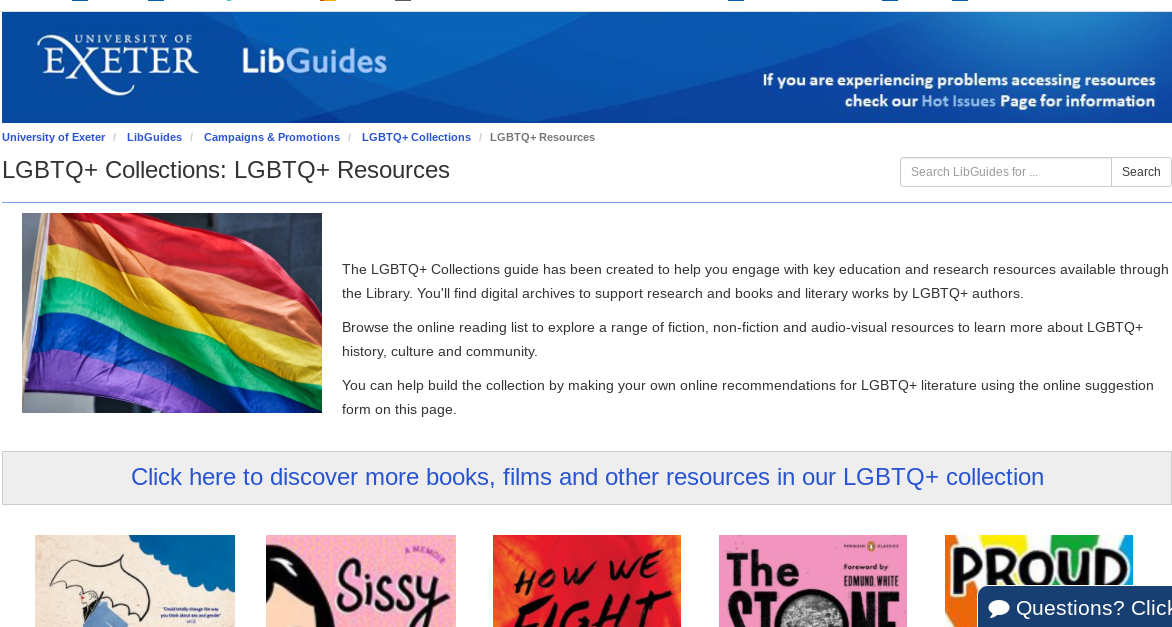