Why does representation matter?

Maisha Reza, Lecturer and Race Equality Resource Officer for the College of Medicine and Health shares some background on why representation in the curriculum matters.

In the local UK context, reports show that BAME students do not perform as well in HEIs as White students with a 13% awarding gap between them in achieving a 1 or 2:1 degree. When we analyze the staff and faculty BAME staff are poorly represented in senior positions and university leadership positions. Out of 19,000 professors employed in UK HEIs, only 400 are BAME women, that is a shocking 2% and highly non-representative of the UK population (UUK & NUS, 2019).

Despite the disproportionate challenges and hurdles that BAME students undergo to get into universities, they still do not stand on an equal playing field with an unequal chance of success as compared to their White counterparts (UUK & NUS, 2019). In fact, even when entry grades and poorer socio-economic circumstances were controlled for, BAME students still displayed an awarding gap (Gowers, 2019). Eliminating the BAME student’s awarding gap requires persistent leadership and will from the HE sector.

This awarding gap could be attributed to a poor sense of belonging. BAME students feeling a poorer sense of belonging has been linked to their degree outcomes (Cureton & Gravestock, 2019). Belongingness is crucial to both the retention and success of students in universities (Thomas, 2017). Belonging also goes beyond personal relationships and extends to “the extent to which students feel personally accepted, respected, included, and supported by others in the school social environment” (Goodenow, 1993). Black and Asian students have been reported to have a poorer sense of belonging and are at risk of feeling uncared for. This is amplified by the very low number of BAME academics and the inability to relate to White staff who do not have the cultural competency to comprehend and relate to a BAME student’s perspective. As a result, making the sense of belonging in BAME students more challenging to achieve (Cureton & Gravestock, 2019).

A huge step towards representation is to diversify the reading list. The reading lists, where students are encouraged to do further reading and form the foundation of their knowledge resource is usually White and non-representative of the diverse local student body. The resources we have been providing in higher education are more aligned with the demographic profile of the academics, White European. Reading lists play a significant role in decolonizing our higher education institutes and is a low hanging fruit in attempting to deconstruct the set pool of familiar resources that has been established (Shcucan Bird & Pitman, 2020).

There are many reasons as to why having a diverse ​reading list is important to me as a student. As a child, I was lucky to have grown up in Nigeria where I was exposed to many different unique cultures and traditions. This helped me to inculcate a strong culture of understanding and collaboration with people from different walks of life. With the current path​ the world is taking, especially considering events in 2020 and before, the social issues faced by individuals globally have become more prominent. This resonated with me strongly as an ethnic minority myself because being a Black man puts me at risk in the world right now. I value diversity because I strongly believe that a diversity of experiences and expertise is critical to foster cultural understanding especially in academia and working life.

I believe the world is becoming increasingly interconnected where challenges/struggles that society faces requires interdisciplinary collaboration (from a diverse pool of individuals) for effective solutions. Having a diverse reading list and a module such as Decolonising Science and Medicine is a great way of trying to encourage engagement with these critical issues. A diverse reading list would allow us to actively discuss and learn about topics regarding social injustice and the unacceptable bigotry faced by People of Colour. These are often excluded must be addressed for us to progress and grow as a society. Including non-White authors or academic material originating from the Global South will allow the University of Exeter Medical School to introduce a culture of fostering a community where multiculturalism and diversity is celebrated with their staff and students from diverse backgrounds. All together this will allow prospective students to gain a sense of belonging to this inclusive community.

Module and programme developers and those involved in education delivery are becoming increasing aware of current global issues of social and ethnic tension, in particular those of ethnic discrimination, ‘othering’ and racism. The past colonial legacy and current neo-colonialism influence the way we as educators develop and share our knowledge and experience with our students. These tenacious tentacles must be removed from our curriculum. We ought to highlight contribution of people in education, science and medicine regardless of their ethnicity and birthplace; eradicate signs of colonial and neo-colonial bias in science and education development and delivery and raise awareness of the value of diversity in higher education while recognising and respecting differences; address the persistent presence of under-representation of ethnic and protected characters in education, science, medicine and health education and in knowledge creation arena. Reviewing curriculum, its content and assessment and student support requires an overhaul of its design. Imbedded within this work requires a revision of educational resources (such as reading lists) we offer to our students. It is important that we encounter our biases and work to address this issue of under-representation of ethnic and ‘other’ knowledge creators and acknowledge their contribution by combating Euro- or West-centric view of science in our curriculum.

Science has long been shaped by Eurocentric ideologies and principles. Physicians such as William Harvey and Andreas Vesalius created the foundations of modern anatomy during the Renaissance in Europe. However, there are many non-White pioneers of research and medicine that remain under-recognised to this day, and biased knowledge is constantly abused to justify prejudice within the field. Nobel-prize winner James Watson’s unsubstantiated assumption between race and intelligence is one of countless examples.

The Renaissance initially started because of a rise in cultural interaction, and revived interest in the works produced by Greek, Roman and Arab scholars. Currently, the reading lists available at academic institutions under-represent the diverse student body we have, and it is regretful that we are missing out on the opportunity of encountering international literature and authors. Inclusion of non-white authors or academic material originating from the Global South will lead to a form of knowledge exchange, creating a globalised melting pot within the field of science.

Encouragement of diversity in knowledge sources will allow students to gain awareness of unique insights and become objective. And only then do we realise that race and diversity is what unites and stimulates the field of science. Different cultures have varying approaches to challenges. Take coining as an example, a dermabrasion therapy practiced in parts of Asia, which is occasionally misinterpreted as abuse by western physicians. Acknowledging such differences not only creates effective patient communication or valuable output for scientific research, it also builds mutual respect and tolerance amongst individuals.

Decolonising the reading list does not mean we must fulfil certain requirements of White or non-White authors to include, it simply means that no one race should have the dominant voice. All individuals have the right to narrate from their perspectives, and we all have the right to hear their voices.

Diversifying the curriculum would promote intersectionality and visibility for silenced voices behind Science and Medicine. It would disregard the idea that only a specific standard of people thrives under institutional settings. When you come from a background that is not represented in the media and education, goals and dreams can sometimes feel inapplicable in the real world. Minorities are just another way of saying underrepresented majorities.

People who fit all the standardized representations of Science and Medicine may not experience exclusivity in education. This exclusiveness can be traced back to colonialism. Even though people are beginning to realize that they need to decolonize their thinking and perceptions, this cannot be achieved without education. If you do not fit the mould that competitive educational institutions promote, then you are compelled to tailor yourself, often losing your voice in the process. This is very problematic because it disregards all the contributions that underrepresented majorities have made so far.

"Fatima al Fihri" is an example of this. She was a Tunisian Muslim woman who founded the first university in 859 AD in Fez, Morocco. How many people who work in academic institutions know about this? To re-structure our perceptions and thoughts about Science and Medicine, we must begin with education. What better way to educate and inform people about unsung heroes, scientists, and silenced voices, than through a university curriculum. Expanding the curriculum to be more multicultural would reflect upon the importance of representation within academia. It shows the possibility of a pursuit achieved by someone who comes from a similar background as yours.

“History is always written by the victors” is a quote that often plays on my mind. It’s easy to rationalise this in the context of many things, as it seems clear – those who win, can dictate how things happened retrospectively.

But this quote doesn’t necessarily reflect what constitutes “victory”. For one side to “win”, the other must “lose”. Western culture has largely been explained through a palatable and easy to digest way that overlooks what was required to become the victor. Colonialism is often touted as this intrinsic thing that British people should be proud of, as “Britannia Rules the Waves”, but what did that rule actually entail?

It’s not easy to explain to the unwilling that the various “victories” throughout Western history have been won through exploitation and domination of groups and cultures who do not align with the Eurocentric, Caucasian status quo. For centuries, colonisation has profited from exploiting the resources of various countries and silenced those who rallied against the decision to do so. As such, it has generated a power dynamic through which minority groups have been prevented from climbing up the ladder, as the countries before it have systematically prevented them from doing so.

The reason for decolonising the reading list is simple – for too long, marginalised groups have been prevented from saying how they have played their part in the advancement of society, often at their own expense. Too many horrors have been overlooked, or swept aside, to present the “winning narrative”.

The time has finally come to not let these voices be silenced anymore, and for that, it is up to those of us in positions of privilege to uplift these groups and challenge racist and problematic historic practices, so that we can move forward on the next cultural chapter as equals, as allies.

“History is always written by the victors” after all. 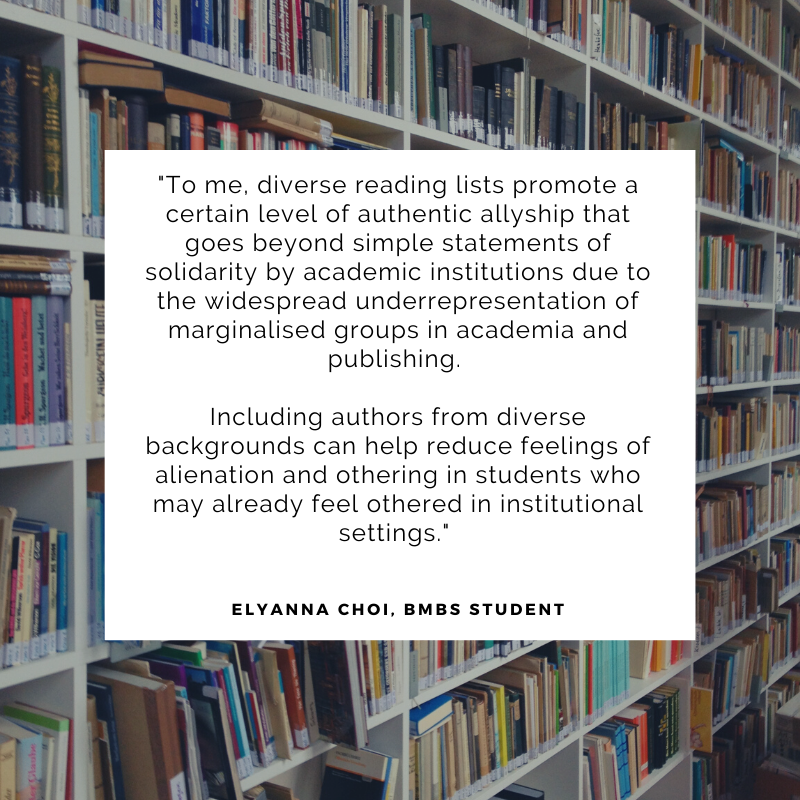 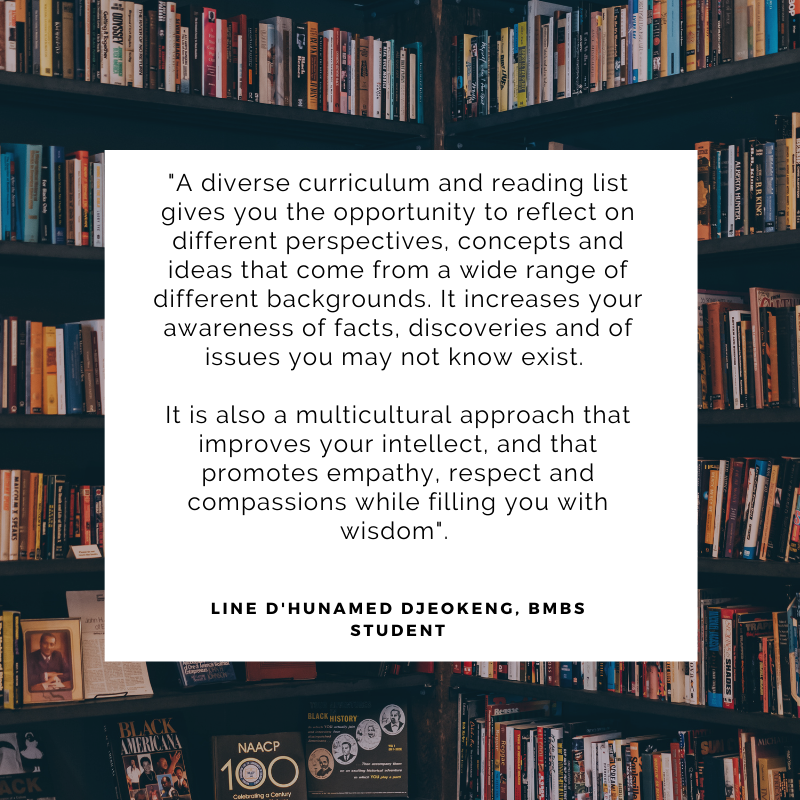 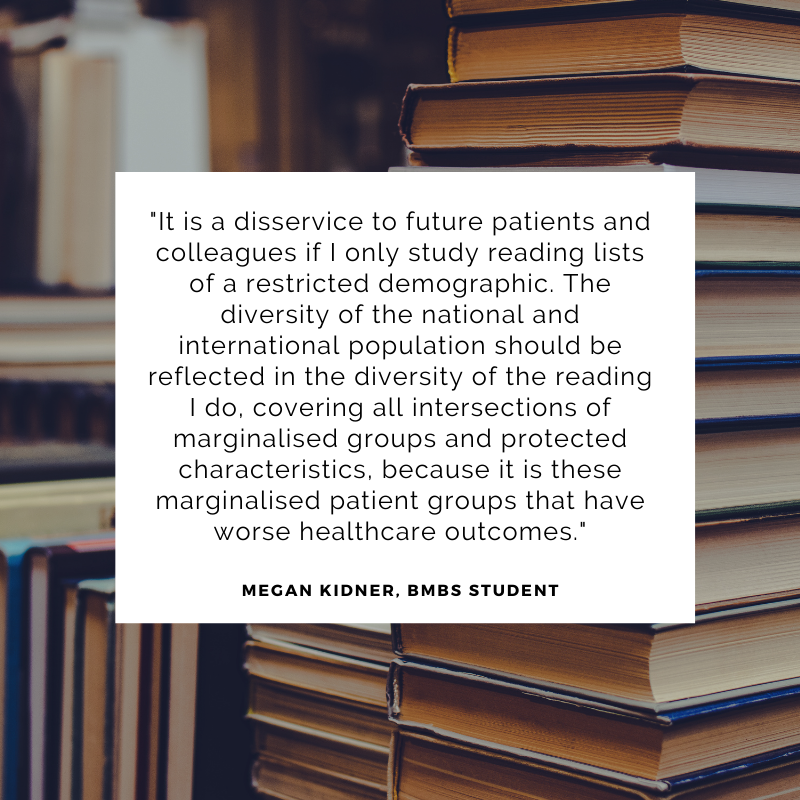 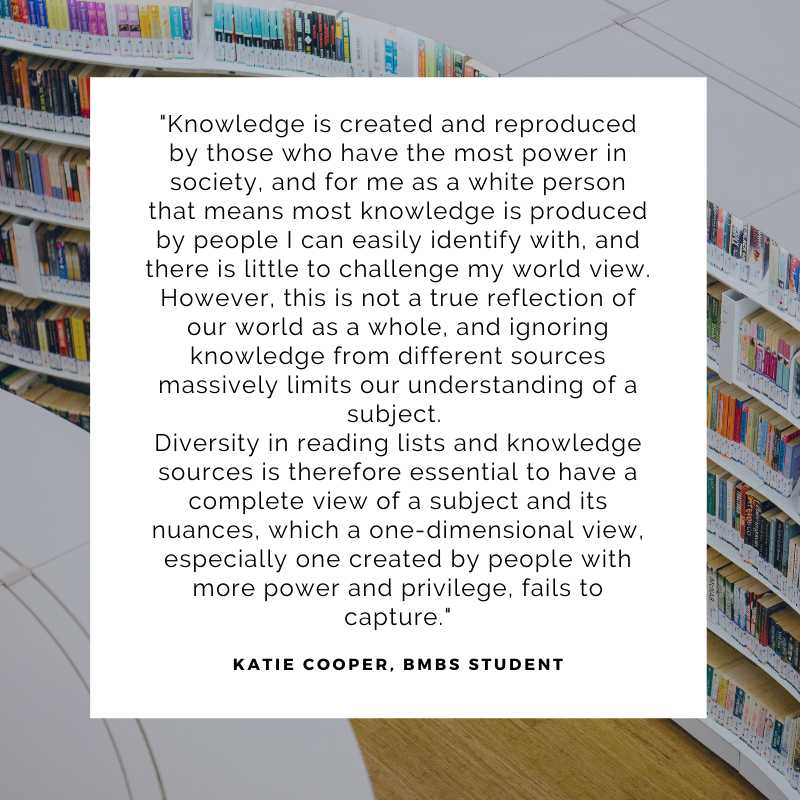 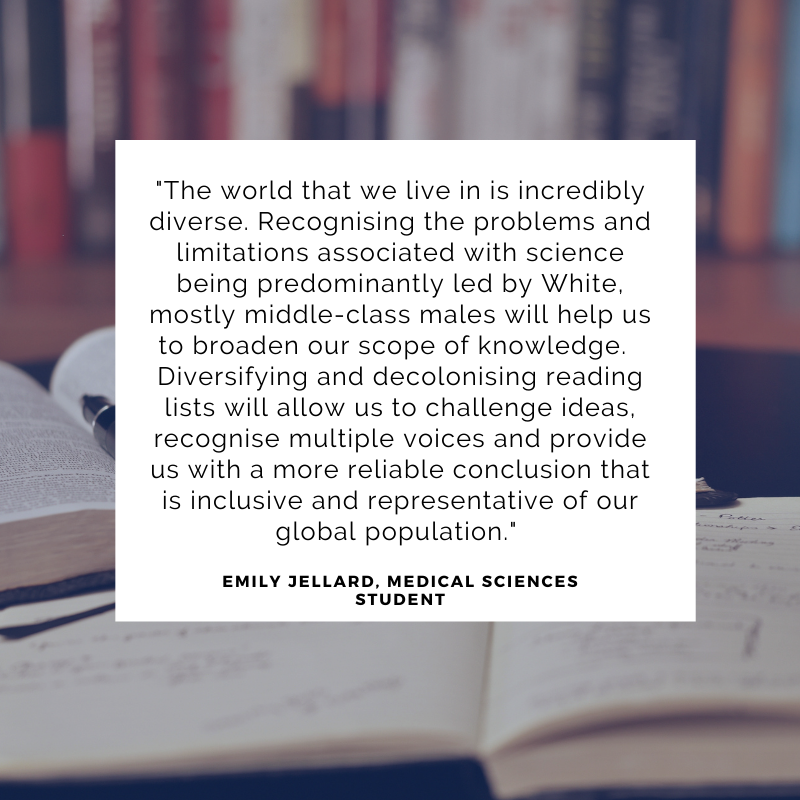 Cureton, D. and Gravestock, P., 2019. We Belong: differential sense of belonging and its meaning for different ethnicity groups in higher education.

Gowers, J., 2019. The BAME Attainment Gap Is Not The Fault Of BAME Students. [online] The University of Sussex. Available at: <http://www.sussex.ac.uk/broadcast/read/50544>.

Schucan Bird, K. & Pitman, L. 2020. How diverse is your reading list? Exploring issues of representation and decolonisation in the UK. Higher Education, 79, 903-920.